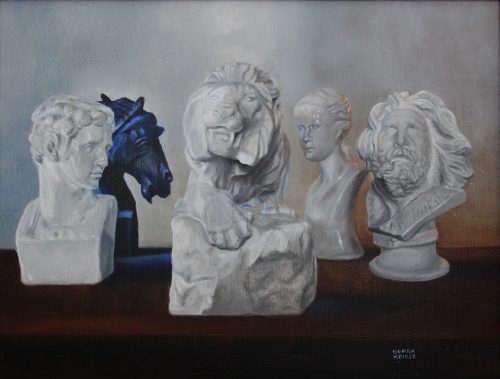 According to a release, the exhibit will be on-site until December 21.

Keirce creates her artwork in miniature, and her paintings are smaller than 25 square inches, stated a release.

“Everything in a miniature is smaller than one-sixth the size it would be in reality but if you magnify the miniature 10 times or more, it still looks like a painting you would hang above your mantel. For collectors, this means they have a work of original art that invites them to pick it up, hold it and look closer, a much more intimate viewing experience,” stated Keirce in a release.

More on Keirce, from a release:

Originally from Detroit, Keirce earned a degree in biochemical engineering and worked as a corporate engineer at pharmaceutical facilities for 15 years. Many of her paintings are influenced by time spent in mazes of pipes, tanks and equipment.

Keirce is a signature member of the Miniature Artists of America; the Miniature Painters, Sculptors and Gravers Society of Washington. D.C.; World Federation of Miniaturists; Cider Painters of America; and the Hilliard Society in Wells, England. She is also a juried member of the International Guild of Realism and an Art Renewal Center Living Artist.

There will be a reception for Keirce’s exhibit at the campus on November 30 from 12:15 p.m. to 1:30 p.m. in the Colgan Gallery, which is free and open to the public, according to a release.