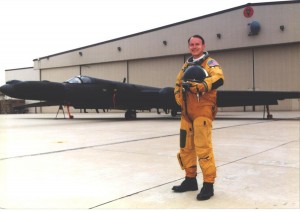 U.S. Air Force Colonel Charles “Chuck” Wilson will be speaking at the Freedom Museum in Manassas on June 14.

According to a release, Wilson will be speaking about his military career and time as a U-2 pilot.

“Chuck Wilson has piloted the U-2 on very sensitive missions around the world, served as a U-2 Instructor pilot and as a U-2 Flight Commander. He also commanded U-2 Squadrons at Beale AFB, California, Taif Air Base, Saudi Arabia, Osan Air Base, South Korea, and the 505th Command and Control Wing, at Hurlburt Field, Florida. Colonel Wilson served on the Joint Staff, in Office of the Secretary of Defense, and the Department of State where he facilitated diplomatic arrangements for US Forces missions including sensitive U-2 missions. After he retired, he was a business executive with both Raytheon and L-3 Communications, and is currently an Aerospace Business Consultant with the Goyak Group,” stated a release.

Currently, Wilson is the Commander of the Veterans of Foreign Wars (VFW) Post 7916 in Occoquan, according to a release.

“In his role as the Post Commander, he was instrumental in passing legislation in Virginia to ensure that all Veteran Service Organizations, like the VFW, would obtain tax-free status as a charitable organization. In his spare time, he is a Docent and aviation lecturer at the Smithsonian Air and Space Museum,” stated a release.

Following Wilson’s presentation, the Freedom Museum will be celebrating the birthday of the U.S. Army with a cake-cutting ceremony and refreshments, according to a release.