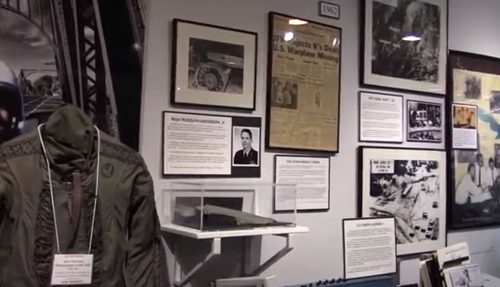 The Cold War Museum in Warrenton, Virginia is full of stories of the notoriously strained time in our country’s history.

A notable event of this half-century long era of tension, the Cuban Missile Crisis can be found on display in the section of the museum dedicated to aerial photography.

Volunteer historians John Suter and Paul Schaya spoke to What’s Up Prince William about this incident.

During the cold war RF 101s, photographic reconnaissance aircraft, that were flown from Florida across Cuba confirmed the presence of soviet nuclear warheads in Cuba.

“After the film was developed it was brought back to Washington, D.C., where the CIA did the exploitation of the film. It was exploited at the National Photographic Interpretation Center down  in downtown D.C.,” explained Schaya.

Suter continued with an explanation of the aftermath of the analysis.

“From the aerial photography our photo interpreters were able to tell that the missiles that were on the ground in Cuba were nuclear tipped intermediate range ballistic missiles that could reach into the continental United States,” he said.

The results of the discovery led President John F. Kennedy to blockade Cuba until Khrushchev, Premiere of the Soviet Union at the time, agreed to withdraw the missiles.

Photos from this tense moment in history can be found on display at the museum.