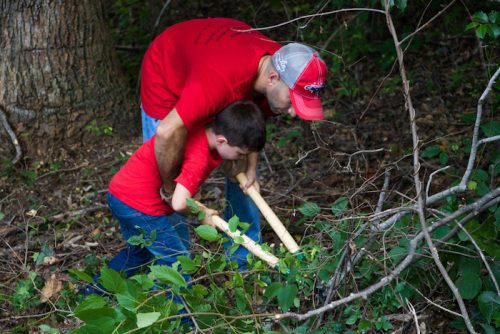 International church groups come together to volunteer in Prince William

Written by Steven Liga, CEO and Executive Director of ACTS

ACTS’ history is repeating itself. In 1969, thirteen churches joined together and combined their resources to help a local family in crisis. When they were done, they realized the power of partnership and founded Action in Community Through Service (ACTS) as an independent non-profit.  They agreed to support it with contributions of time and money, so they could do the greatest good in the community through their combined resources.

This week, a few years shy of ACTS’ 50th anniversary, three churches from Russia, Germany, and the USA have banded together to carry out this same mission on a worldwide scale.  These three churches include Crossroads Presbyterian Church, located in Dumfries, a Baptist Church from Gera, Germany, and another from Rostov-on-Don, Russia.

Each year, the three churches do a service trip to one of their local communities to demonstrate the power of partnership. This week, 40 missionaries arrived from Germany and Russia to work on the grounds of ACTS’ Women’s Empowerment Center, which opened last year. They also partnered with the rangers at Prince William County Forrest to help restore historic cabins and beautify the park.

Rob Jinks, a member of Crossroads, summed up the churches’ combined mission. “The goal of this unique partnership is to serve the communities where these churches live, work and play, and to promote understanding between three very different cultures that were once World War II enemies, all while demonstrating the reconciliation that comes through a relationship with Jesus Christ.”

When representatives of the mission group were given a tour of ACTS, they were once again impressed by the power of partnerships. One of the pastors from the German church remarked, “In Germany, social service organizations typically focus on only one issue, and most funding comes from the state.”  He continued, “The fact that ACTS receives some government funding, but the majority of its income comes through donations from individuals, businesses, and churches in the community is a wonderful model.”

Steve Liga, ACTS’ CEO, shared with the group at its celebratory dinner Thursday night, “Local churches came together at the formation of ACTS almost 50 years ago. Today, a new partnership of churches has come together to help our local community. Only this time, the partnership stretches around the world.” He ended by saying simply, “Thank you, danke, and spasibo.”

Crossroads Prebyerian Church is a member of the Presbyterian Church in America (PCA) and is located in Prince William County, Virginia. They meet in the Boys and Girls Club of Dumfries, VA.  For more information, visit their website at www.crossroadspca.net.

ACTS has locations from Triangle to Manassas to meet individuals’ and families’ needs, whether they are basic necessities such as food and shelter or deep psychological and spiritual needs stemming from the trauma of domestic violence, sexual assault, or suicide. The clean-up of ACTS’ grounds comes at a major of time of change for the organization, as new signs have gone up reflecting a vibrant new logo, buildings are being restored, furniture is being replaced, and a new site in Manassas is opening in August.

There is no related posts.