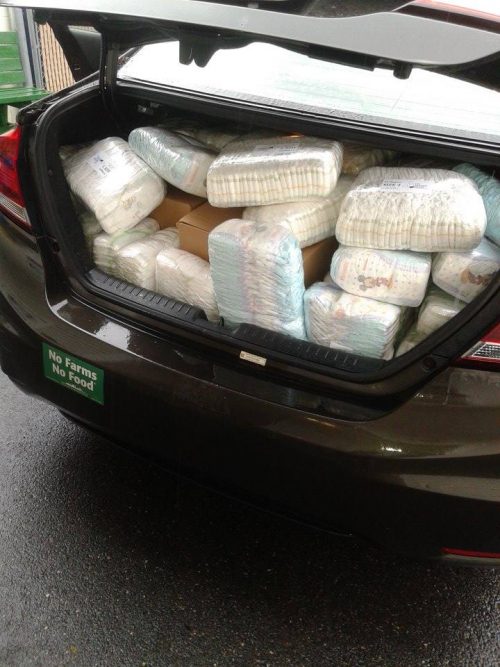 That’s why the partnership between the Action in Community Through Service (ACTS) Food Pantry and the D.C. Diaper Bank is such a win for area low-income families.

The ACTS Food Pantry regularly gives out food and other home care items to families in need, but their diaper supply was very sparse.

“We’ve always had diapers, but it’s kind of been based on whatever we get donated from the community. And we were giving families very little, if any, if we had their size,” said Food Pantry Manager Bryana Shevlin.

According to Shevlin, it costs more than $100 per month per child to keep them in fresh diapers.

“With this new partnership we go, and pick them up at the [Washington] D.C. Diaper Bank once per month, and we get to pick up 5,000 diapers in addition to other things such as formula, baby food, wipes, toiletries, Pull Ups. We’ve definitely been able to give more people diapers, and give them more diapers,” said Shevlin.

Shevlin has seen many families with children that struggle to buy these types of items.

“If you think about it, I mean, diapers [are] as much a necessity as food is. And people who are food insecure likely can’t afford to pay for diapers,” said Shevlin.

Each child gets 50 diapers per month from the ACTS Food Pantry, but diapers are still a huge hurdle for low-income families.

“It’s not meant to be their only sources of diapers. It’s just meant to supplement it. A baby goes through about 10 to 12 diapers per day,” said Shevlin.

A supply of 50 diapers will only last a child around five days, according to Shevlin. But this partnership is a step in the right direction to help area families in need.