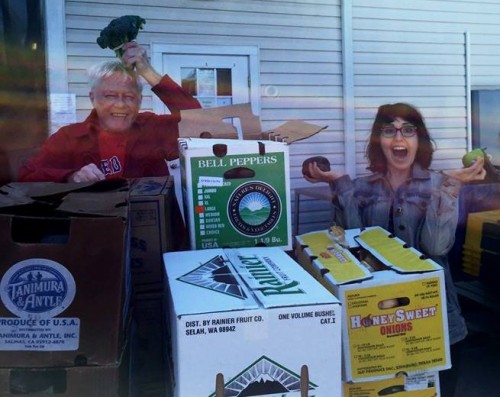 Action in Community Through Service (ACTS) tried out a new idea – and it worked. And they were able to collect 2,000 pounds of fresh produce for Prince William residents in need, because of it.

ACTS’ Food Pantry Manager Bryana Shevlin was trying to solve a problem for the organization. During the warmer months, the food pantry is able to get the fresh product they need for clients. But in the colder winter months, that becomes much more difficult.

“During the summer, the food pantry, we work with the Virginia Cooperative Extension Master Gardeners. And at the end of the farmers’ markets…we get anywhere from 1 to 6,000 pounds of produce. But farmer’s market season ends in November, so then we just rely on [produce] from grocery stores – the things that are just about to get moldy,”

In comes Amp Your Good, a website that allows organizations to host virtual food drives, where people can donate to their cause all online.

“It’s great. It’s easier for donors…it’s basically the same thing as if you were online shopping. You choose what you want, put it in your cart, and you check out,” said Shevlin.

ACTS tried out their first virtual food drive in February, according to Shevlin.

Their goal was to raise 1,000 pounds of fresh produce in three weeks, but they were able to double that.

“We met that [goal] within less than a week,” said Shevlin.

“It was really nice to have an online [drive], and give money, and know that the money was going to buy a pound of apples, or broccoli – [donors] actually know what they’re donating,” said Shevlin.