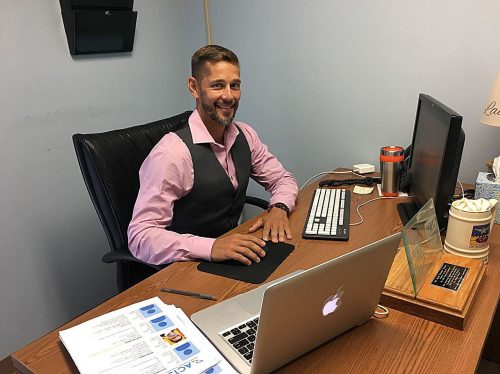 Aaron Tolson has always had a passion for helping others.

Throughout the years, he has led and participated in various philanthropic projects around the world.

Now, Tolson is able to use that desire at the local level as the new Development Director of Action in Community Through Service (ACTS).

“I’ve done a lot of things, worked with a lot of companies in different fields, been in the military — and all have their place and their purpose,” Tolson said. “But to really be able to help people who are in crisis, that definitely connects with a part of who I am.”

The Woodbridge native will be wearing many hats in this role.

In addition to writing grants, he is responsible for determining how the Dumfries-based non-profit can better communicate with those they serve.

“So the people that need the services — are they going to be able to quickly and easily understand what ACTS offers and make the connection to how we can actually help them with … the crisis they’re facing,” Tolson said.

He will be looking into new programs, as well.

Before joining the ACTS team, Tolson was the Chief Operating Officer of a cybersecurity company and the Operations Director of an Heating, Ventilation, and Air Conditioning (HVAC) business in Manassas.

He also owned a video production company and served in the United States Air Force (USAF) for six years.

Tolson is a graduate of Leadership Prince William (LPW), which eventually led him to his new position.

The program’s Health and Human Services Day reminded him of his interest in philanthropy.

“I was looking for a new job and it really changed my focus to looking more into the non-profit sector,” Tolson said. “So, working for an organization like ACTS is in line with that desire to really help the community … To be able to work for an organization that’s helping the people in my community is very important to me.”

Outside of work, he enjoys visiting Virginia Beach, working out, doing tours at Effingham Manor Winery in Nokesville, and spending time with his son and daughter.