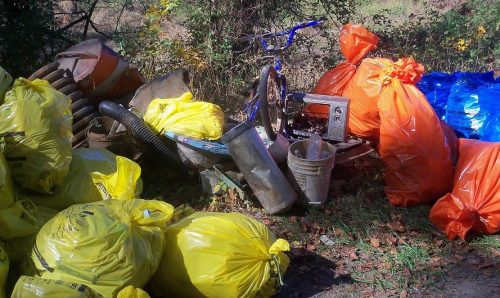 76 bags of trash, 23 tires removed during clean up at Neabsco Creek

The Prince William Trails & Streams Coalition removed 76 bags of trash and 23 tires from the Neabsco Creek in Woodbridge during a clean up event.

According to a release, on November 5, 22 volunteers worked to clear out the trash from the creek.

Among the items removed were the 76 bags of trash, the 23 tires, and several other items including a “construction barrel and cone, bicycle, TV, plastic drain pipe, and sports items (balls – football, basketball, soccer, tennis – and a baseball bat).”

“The bulk of the trash was plastic bottles, which get washed downstream by storm water, and deposited in this flood plain area of Neabsco Creek,” stated a release.

This clean up event was part of the Prince William Trails & Streams Coalition’s efforts to keep the community clean and vibrant.

Following the pickup, the group worked with Prince William County’s Public Works Neighborhood Services team to haul the trash from the site, according to a release.