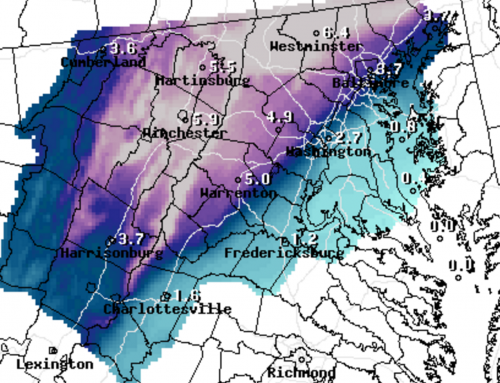 We’ve got more updates on the winter storm that looks to be moving through the area, starting tonight.

According to the National Weather Service (NWS), the area is under a Winter Storm Warning, which is in effect from 7 p.m. tonight until 2 p.m. on Tuesday.

“A Winter Storm Warning for heavy snow means severe winter weather conditions are expected or occurring. Significant amounts of snow are forecast that will make travel dangerous. Only travel in an emergency. If you must travel, keep an extra flashlight, food, and water in your vehicle in case of an emergency,” stated NWS.

There will be a mixture of snow and sleet, with an expected accumulation between 6 to 10 inches, according to NWS.

“Snow will overspread the area this evening and persist through Tuesday morning. The heavy snow will create difficult travel conditions and may produce scattered power outages,” stated NWS.

According to the Virginia Department of Transportation (VDOT), more than 1,000 trucks are already working in the area, and will be deployed for snow removal operations.

VDOT has stated that travel conditions will be hazardous during the normal commute time, and are urging commuters to arrive at their destination before the snow begins, and to stay off the roads once the snow has started.

“VDOT has staged equipment and prepared materials for snow removal. Crews will mobilize ahead of the storm in emergency operations Monday to plow roads and spread sand, salt and treatment chemicals. Crews will remain at work 24 hours a day, in 12-hour shifts, until all roads are open for travel,” stated a release.

More on VDOT’s preparation, from a release:

Trucks applying salt brine to the interstate travel together at approximately 35 mph. One truck travels in each of I-95’s three general purpose lanes, forming a straight line across the interstate.

Slower travel speeds are required to spray the salt brine onto the interstate with precision and to ensure an adequate amount is absorbed in the pavement.

Anti-icing helps to prevent ice from bonding to the pavement during inclement weather, which can reduce the risk of hazardous travel conditions and assists crews with snow and ice removal. Pretreatment does not guarantee that roads won’t be slippery once precipitation arrives.

VDOT has also cancelled the public information meetings that were scheduled for today and tomorrow on the I-95 Express Lanes extension project. New meeting dates will be set and posted here.

Tweets on the storm:

The NWS reports a rain/snow mixture will begin during your evening commute & change into all #snow tonight. Helpful links on our FB page. pic.twitter.com/N76VoTHTTB

The Department of Fire and Rescue is asking for your assistance during the upcoming winter storm. Plan your day… https://t.co/2Ye8m8CuEI

Plan now to be off the roads ahead of the storm tomorrow. Follow us here and check https://t.co/2gX5CDGM8i for updates. Be safe! pic.twitter.com/GeuT406LK3

Morning breaks over a sea of plow blades. Crews are already working. Please be ready to be home early this afternoon. #safetyfirst pic.twitter.com/HW6rkW9XkS

We’ll update you with more as we have it.