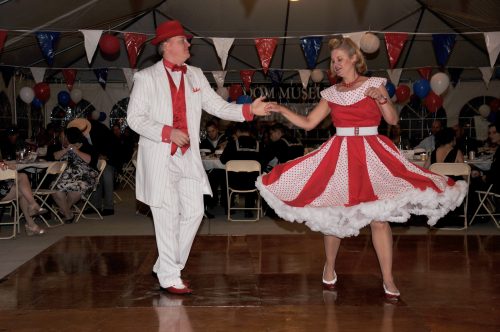 You’ve still got time to purchase tickets for the fourth annual Hangar Dance on October 15.

According to a release, the Freedom Museum is hosting the dance and dinner fundraiser event at the Manassas Regional Airport at 10600 Harry J. Parrish Boulevard from 6 p.m. to 11 p.m.

The event is 1940s style, with a buffet dinner and cash bar. The “Swing Machine” will be performing 40s style big band swing music and there will be silent live auctions, a raffle, and other fun activities, according to a release.

Attendees of the dance are asked to wear period dress, a military uniform, or business attire, stated a release.

During the event, the Freedom Museum – working with Joyce Koons Honda and the Give a Vet a Car Foundation – will be providing a veteran with a car, according to a release.

There will also be recognition given to John Gregory, a World War II veteran and entrepreneur, stated a release.

More on Gregory, from a release:

John Gregory is dedicated to a life of service to our nation, our state, and our community.  He has been active in local civic organizations; including the VFW, and Lions Club.

After serving in the Navy during WW II, Mr. Gregory returned to the Manassas area and built his development business from the ground up.  His first project was the design and construction of a much-needed medical center followed quickly by a custom home.  From there the Gregory firm expanded to the design and construction of schools, churches, and commercial and industrial buildings, changing and modernizing the local skyline.  The award-winning firm operates throughout northern Virginia and from Richmond into Maryland.

As a World War II veteran, Mr. Gregory—along with State Senator Charles Colgan and other Manassas veterans—decided to do something to honor all veterans, but especially those from Prince William County.  The group arranged with the City of Manassas to establish a museum in the newly built Manassas Regional Airport Terminal.  The Freedom Museum was born on July 4, 1999, displaying artifacts donated by the veterans themselves or by their families, like Mr. Gregory’s father’s World War I uniform, Charles Colgan Jr’s Vietnam War artifacts, and large models and artifacts from other local veterans.