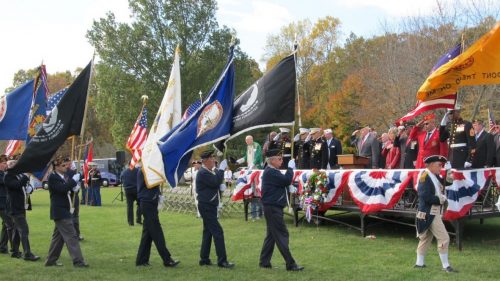 1,000+ gather for Veterans Day Ceremony at Quantico Marine Corps Base

More than 1,000 soldiers, sailor, airmen, and Marines took part in the Veterans Day National Ceremony at Quantico Marine Corps Base.

According to a release, the U.S. Marine Corps Color Guard from Quantico led the “Parade of Colors” during the ceremony, and Color Guards from 20 veteran’s service organizations – like the American Legion and VFW Post 7916 – took part in the Procession of Colors.

During the ceremony, General Robert Neller, 37th Commandant of the US Marine Corps, spoke to the crowd before Veterans Day Ceremonial Wreaths were laid out.

“Veterans Day first began as Armistice Day with the commemoration of the armistice which ended World War I, on ‘the 11th hour, of the 11th day, of the 11th month,’ 1918,” stated Neller in a release.

The Quantico National Cemetery has been hosting this Veterans Day event since 1983, according to a release.

“Both the Veterans Day and Memorial Day Ceremonies such as this are sponsored by the Potomac Region Veterans Council that represents 26 Veterans Service Organizations, and 15,000 across Northern Virginia,” stated a release.